Mark Liprini has been serving MAF as a pilot for the last 21 years as a relief pilot. When Mark moved from South Africa to Uganda for a full time posting, Lorraine was able to join him and they’re now adventuring together helping MAF wherever needed.  The Liprinis don’t seem to shy away from challenges or new beginnings.  When they noticed a position had been left vacant for quite some time in Tanzania, they felt it was a perfect fit for both of them so decided to up and leave their relatively new home in Kampala.

Lorraine explained some details about their voyage.  ‘After 18 months in Uganda, we left for Arusha, Tanzania for Mark to fill the post for our final 2.5 years contract, as Senior Pilot and Operations Manager, which had been vacant for 8 months.  It was a great blessing that MAF offered to fly us along with all of our household goods and 4 pets, from Kajjansi to Arusha in one of MAF Uganda’s 208’s, LDR.  This took place on Tuesday 9th August and was a wonderful flight!  We packed everything with us so that we wouldn’t need to buy goods in Arusha, which is a lot more expensive than Kampala.’  LDR’s 3 pods and all of the cabin were crammed full, barring a seat for Lorraine and her dog behind the pilot’s seat!

‘Our 2 dogs were both supposed to be in their crates, but due to a need for space, our smaller dog spent the flight in the tiny space alongside me. Our bigger dog was in her crate, and the 2 cats were safely in their crates at the back of the aircraft. The flight time in total was 3 hours – but with a short 15-minute hop from Kajjansi to Entebbe, where we had to stamp out of the country, then a 2 ½ hour flight to Kilimanjaro, Tanzania where ourselves, all our goods and the pets were thoroughly inspected by customs officials.  We then flew another short 15-minute flight onto Arusha, where we were met with a truck which transported our goods to our new home.’ 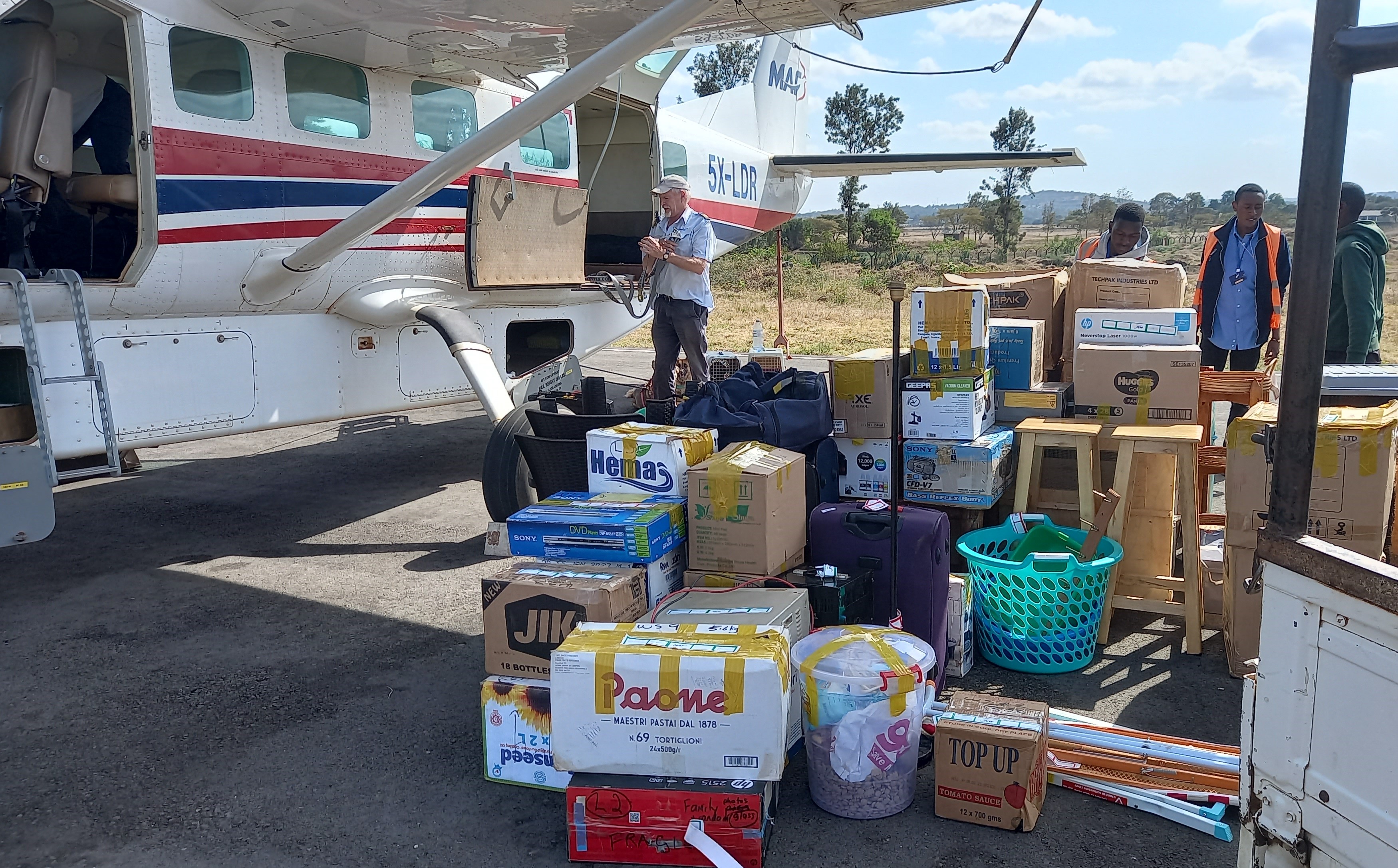 Andrew Parker was the Liprini’s pilot.  Mark made an interesting comment about their connections over many years in relation to the photo of the two of them. “This is an awesome historic photo for me. I first met Andrew at 43 Airschool in South Africa when he was preparing for MAF, way back in 2003/4. I then flew him, his wife, and young children from Dodoma, (TZ) to Songea (TZ) in 2009, for their language school, as fresh faced, newly arrived MAF Tanzanian staff!  Yesterday he flew us, in LDR from Uganda to our new, and last posting in Tanzania.’