It is MAF’s goal to reach out to the many that have not been reached by the good news of salvation through Jesus Christ. We would like to challenge you to pro-actively think how to reach out to these people. If transport is one of the practical problems that needs to be overcome, please contact us to discuss how we can help each other. We are determined that the remoteness of an area should not be the reason that the un-reached are not evangelised.

MAF recognises that flying by its nature is an expensive means of transportation. For this reason, all MAF flights are subsidised for churches, mission groups and other NGOs. If your organisation could benefit from the service MAF offers, then please get in touch to start a conversation with us about how we can help, and complete a Partnership Agreement to enable us to continue working together. Only passengers from registered organisations are accepted on our flights.

We want to show God’s love to people in spiritual and physical need, and to make our service available to you in order to make your ministry more effective. Please contact us so that together, with God’s help, we can make that vision happen.

If you are interested in working in partnership with MAF and want to find out more about it then please contact us to discuss the possibilities.

We are proud to work with many fantastic organisations within Uganda, such as the following two groups who are doing amazing work to reach people with the word of God.

Far Reaching Ministries is committed to bringing long-term discipleship and systematic teaching of God’s Word to individuals in Africa, China, Russia and other parts of the world where such teaching is either unavailable or inaccessible.

Through the discipleship of indigenous leaders, teaching community Bible Studies, planting churches and Bible Colleges, we hope to see native Christians receive a firm Scriptural foundation, upon which they can begin to build the ministry that God is calling them to.

Far Reaching Ministries has been operating in the areas of northern Uganda and southern Sudan since 1999. In that time eight of our staff members have been killed by the LRA and numerous others have barely survived attacks on vehicle convoys. We have ministered to children and adults who have been victimized by the LRA and have experienced firsthand the anger and the fear that are a part of not knowing when the next attack will come.

Jesus Film Ministries has a passion for the people of Uganda and for them to hear the Good News of Jesus Christ.

There is a great hunger for the Gospel throughout Uganda and neighbouring countries. We want to see the urban areas, the villages, and the islands on Lake Victoria reached with the Gospel. There is also a great need for the local church to be built up, for denominational differences to be bridged and to encourage each other in order for God’s kingdom to grow and mature. It also wants to help the Church in the Sudan and encourage their efforts to spread the gospel.

Our outreach is done through gospel video ministry to communities, schools, prisons and church groups. We also reach out to the unreached through open-air preaching in the communities and team up with University and College students on Short Term Evangelistic Missions. We attend to the needy through distribution of food, clothes, and toys (for children) and other items. Medical and dental clinics bring the much needed services to those in the villages. We distribute bibles and other gospel literature to the rural church as The Lord provides. We organize and host conferences and seminars to help with teaching and discipleship of the rural church.

Every Village has had to show brave tenacity over the many years MAF Uganda have been partnering with them.  We’ve seen them deal with the disappointment of war which led to their established programs in South Sudan being looted and the team being chased further to the border.   More recently covid has interrupted some movement, but Every Village have soldiered on and never given up their pursuit of spreading the gospel.  Every Village continues to successfully operate community development programs in the region on Mvolo, Tonj, and Aweil East.

We’re only halfway through the year but the activities that Every Village have implemented so far in 2022 are exciting and ground-breaking.  They include the following ministries 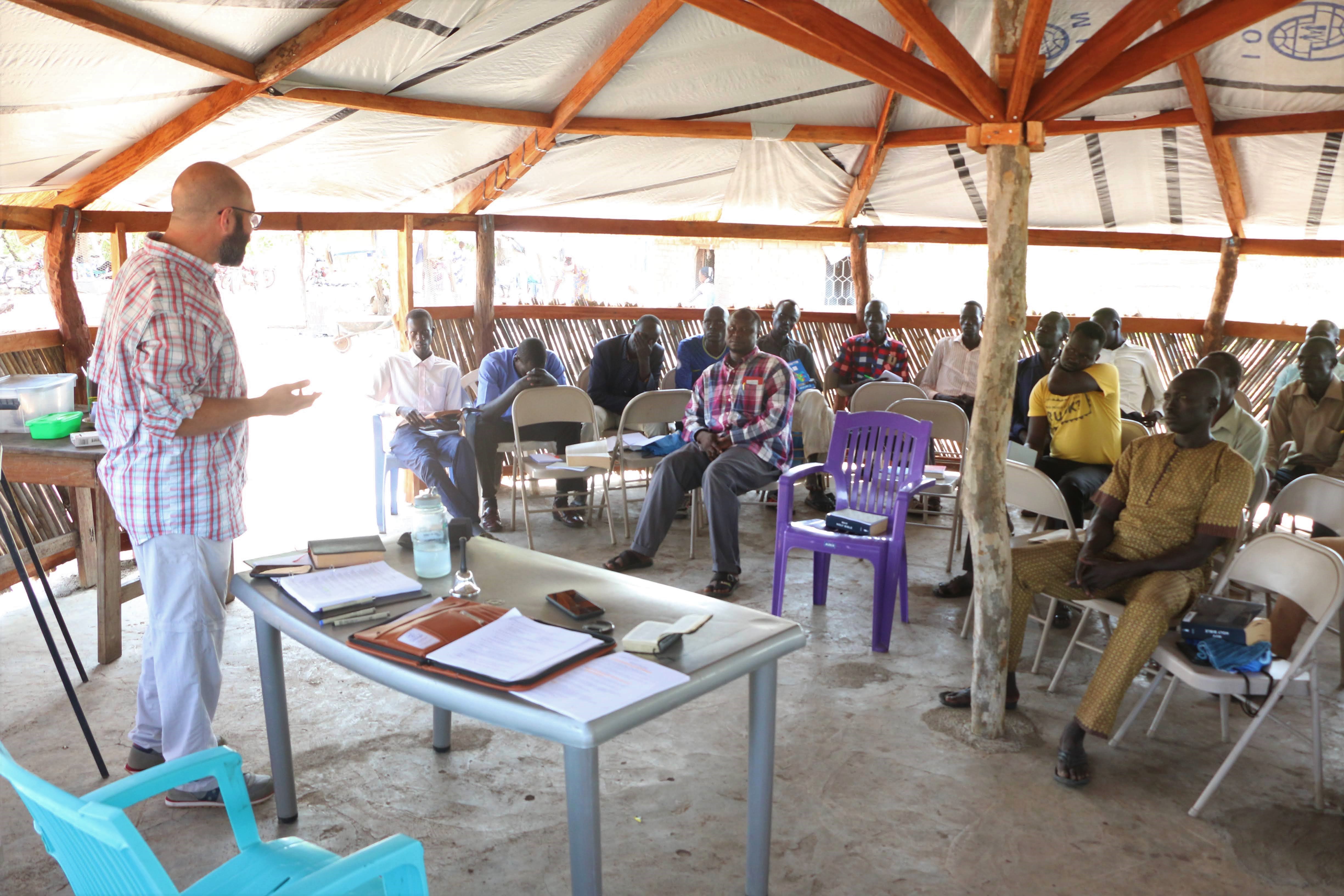 Every Village continue operating three radio stations and began the year with 15 staff members.  Brad Beless, Operations Director of Every Village, passed on a glowing report, ‘We have distributed 10,000 solar-powered radios so far this year, with plans to distribute another 20,000 by the end of the year. These radios are fixed-tuned to our station and continue to significantly broaden the accessibility and popularity of our station.  Every Village has also expanded our Radio broadcast through the installation of two repeater towers. The first, implemented in 2021, is in Marial Baai (Aweil West), and repeats the Weer Bei station. The second, implemented this 2022, is in Ngapagok (Tonj East), and repeats the Door FM station. Both these repeater stations allow Every Village to reach new populations and bring the good news of Christ.’ A repeater, for layman like me, receives a radio signal and retransmits at a higher power level, allowing it to travel longer distances. This allows radio users to communicate when obstacles or distance are an issue.  Brad explained, ‘We were having trouble connecting our radio broadcast from Tonj, but during the trip a technician came and was able to get it working!’

Every Village also hosted a pastor conference at their station in Tonj, with plans for hosting similar conferences in Aweil and Mvolo by the end of the year. These conferences serve to train and strengthen the network of pastors and church body as a whole.  Additionally, our radio station hosts community events, such as peace conferences and youth sporting events, that promote peace and reconciliation throughout the community.  The three radio stations were able to broadcast throughout all of 2020.  Through Every Village’s operation, the local community can gain access to local and national content and hear church songs and preaching.  Each station broadcasts approximately seven hours, six days a week, totalling to upwards of 6,500 broadcasting hours between the three studios every year.

Every Village continues to operate water programs in our three locations, managed by 6 staff members.  ‘We have officially launched a new initiative within the Water Program called ‘Sustainable Water Corporative’ (SWC). This initiative encourages various stockholders to come together to establish a healthy water sector. In 2021 Every Village helped facilitate 46 repairs, and with the launch of SWC, we have so far repaired 100 water wells in 2022.  Our total number of well repairs has reached 205. Through the work of the SWC we hope to see more communities take physical and financial responsibility of their water wells so that they are maintained with excellence.  In addition to repairs, the EV field team continue to form and train water committees that are tasked with overseeing the well-being of the water well. Every Village partner with these committees, as well as local government officials, to implement our sustainability projects.

In 2021 Every Village hired our first employee as a part of the People Program.  They now have four staff, who serve in pastoral roles in the community. These employees travel to the communities in connection with our Water and Radio work to share about the Bible and encourage communities in their faith.   Every Village has also begun to show the Jesus Film in Tonj, having shown the film 37 times to 9,727 people so far in 2022.  The Jesus Film is a great tool for evangelism, and EV hope to implement the Jesus Film in Aweil and Mvolo shortly.

Brad Beless kindly updated me about two MAF Uganda flights that have happened recently with Every Village between May and June. ‘My family flew from Kajjansi to Tonj with Pilot Stefan Hug. I was able to spend three weeks with my family in Tonj.  In June, Pilot Gregory Vine flew Country Director, Andrew Brown and a team from Tonj to Mvolo, and then back to Kajjansi. Greg overnighted with the team in Mvolo, which allowed the team longer on the ground.  That flight brought most of our South Sudanese managers, including Andrew, to Kampala for our annual team retreat.’  Brad wanted to pass on Every Village’s thanks, ‘We are very grateful for MAF for these trips. They have allowed us to work in and out of Uganda for the first time in many years.’

Please continue praying for the work of Every Village. MAF has valued partnering with them for decades because of their Christ-centred ethos which is practically and spiritually elevating men and women in South Sudan.